The museum is dedicated to the significant Greek writer Alexandros Papadiamantis (1851-1911). It is the very house where he spent the last years of his life up until the day of his death. The house is located at the center of Skiathos island and is one of the old, aristocratic households, designed with specific local architecture.

A 75m2 building, made in 1860, which housed the entire Papadiamantis’ family: the father Emmanuel, the mother Gioulo (Aggeliko) and their five children (three girls and two boys). Upstairs, there were the three bedrooms where the family spent most of their time and on the outside, at the half-closed balcony, there was the family’s summer kitchen. Today, this small kitchen has turned into the main entrance to the museum through Papadiamantis’ square. Most of the museum’s exhibits (several objects, furniture and clothes) have been donated by Alexandros’ close relatives, mostly by his nieces and nephews.

By entering the house, on your left, you will see the place where the family prayed (an oil-lamp and a censer) that reminds us of the family’s tied connection to religion. On you right, you can observe the writer’s small bedroom, which he temporarily used every time he returned from Athens. In the middle, there is the living room with a sofa and Papadiamantis’ personal desk. Right behind the desk, on the wall, there are numerous family portraits.

His personal writing tools are kept safe in a showcase on the desk, tools like his favorite pen –with which he wrote all of his 180 famous novels-, his inkwell, hymnbook and many copies of his manuscripts. Unfortunately, the house had been robbed in the past by heretics, who took four of the writer’s personal objects (his sandbox, stamper, rosary and his tobacco bag). The last room was the family’s sitting room with a fireplace, sofas, the food table (which they called “sofra”), a big chest and a fitted cupboard filled with decorative objects. Inside this very room, on the 2nd or the 3rd of January 1911, Alexandros left his last breath, bedridden by severe flu and pneumonia.

From this floor, access to the house’s yard and ground floor was permitted through the use of an indoor, wooden staircase. The ground floor was, mainly, used as a storage room by the family. Yet, in 2001 and after many necessary adjustments were made, locals reformed it into a traditional bookstore/exhibition room, so that visitors could get a first-hand glimpse of the writer’s work. On one side of the room, you can see all the exhibits and the library, which consists of the writer’s personal books, some old editions of his masterpieces, posters and a photo gallery. Moreover, in one particular showcase, visitors can observe all Papadiamantis’ translated pieces of work. The opposite side of the room is embellished and filled with his most contemporary works, postcards, some photographs of the museum itself and more. The outside of the house was also refreshed: the family’s old lemon tree has been re planted, the little paved yard has been preserved and filled with a number of different, lovely plants such as basil, marjoram and many more pretty flowers which, altogether, remind us precisely what the family’s garden looked like!

After Alexandros’ death, the house remained under the family’s care, since his three unmarried sisters continued to live there, until 1936. However, in 1940, the family decided to sell the property to two local men until 1954, when the island’s borough ordered the expropriation and conservation of it. In 1965, the Greek Ministry of Culture adjudged the preservation of the building as a ‘historical monument’. In 1993, the museum’s utilization was granted to a local enterprise with the name “Skiathos’ Evolution”.

The House-Museum welcomes approximately 25.000 visitors from all around the world and will always be there to remind us -and to the generations after us- who Alexandros Papadiamantis was and how significant his contribution was to Greek Literature. 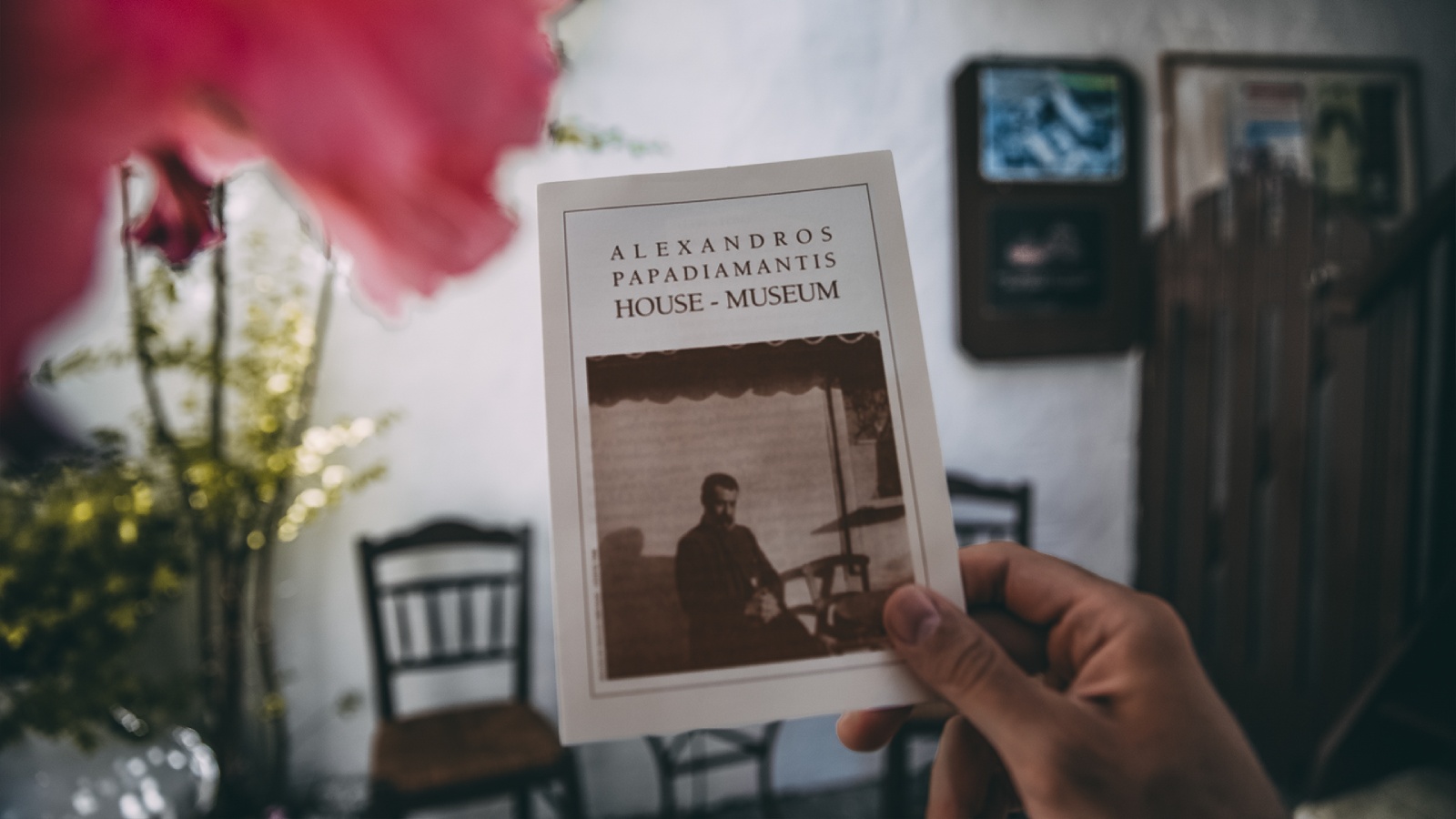