The museum is located in Skiathos, in the Cultural Community Centre of “Bourtzi” and was founded in 2015.

The island of Skiathos was destined to play a crucial role in both our naval tradition and naval architecture due to its advantageous geographic position and its secure port. In 478 B.C, locals acceded in the first naval alliance with Athens and, sometime later, they acceded in the second. Over the next turbulent times, Macedonians, Romans, ancient Venetians and Ottoman Turks were constantly using the island as their base for their conquering plans.

After the Russian-Turkish wars, locals were given the right to build small ships on the island. Later on, captains were able not only to enlarge their ships, but also to extend their activity in the Mediterranean and the Black Sea. Furthermore, what heavily enhanced the development both of shipbuilding and seamanship in Skiathos, was the transfer of the main city from the isolated area of Kastro (Castle) next to the well-secured area of the port, as it still remains. Additionally, locals’ initiative to share the profits with the ship’s crew, as well as the crew’s tireless hard work, were the two main reasons behind the successful growing of ship navigation in Skiathos.

In 1833, locals were given permission to lumber several woodlands, which very quickly led them to take advantage of the new, vast areas for sailing-boat construction. Most -if not all- of the handymen were illiterate people, who many times had to hire another schooled man to help them write their own signature. Nevertheless, when it came to ship-building, those unlettered people made an astonishingly good work: the ships they made were highly praised by professional ship-builders, in and out of Greece, for their enormous size and their excellent naval architecture. In addition, the captain of the Royal Navy himself, James Kennedy, in a formal letter of his to the English admiralty, cited those Greek handymen for their brilliant work. Also, the English admiralty, in its official editions, refers multiple times to Skiathos’ people’s ship-building skills. However, apart from the workers’ impeccable talent, what also boosted the island’s shipping throughout the years was the cooperative spirit: this spirit was cultivated during the late 17th century and was, mainly, based on the local’s trust and honor.

The museum’s exhibits tell the story of the long-lasting ship-building tradition of Skiathos, as well as the famous “tarsanades” (shipyards) which assisted both the development of Skiathos’ sailing, up until the 19thcentury, and its evolution to an ocean-liner, ship navigation industry. The museum’s collections consist of 600 -and more- exhibits, some of which are ship-building tools, blueprints and manuals for sailing-boats’ construction, a representation of traditional ship-building carpentry, a unique collection of micro ship-building, 19th century paintings of Skiathos’ sailing boats and many more. Furthermore, at the section where the seafarer shipping is presented, visitors can observe naval maps, navigation tools and journals (of the ship’s deck, engine and radio), officers’ and crew’s diplomas, a full representation of a Liberty ship’s deck, simulacrums of the Greek Navy boats as well as a small tribute to “Katsonis” submarine, which sank near Skiathos in 1943, during WWII. 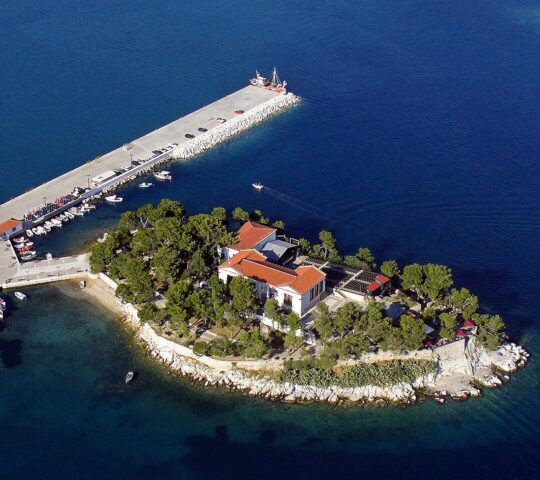 The ancient fortress of Skiathos called Bourtzi, is located on a small peninsula, dividing the… 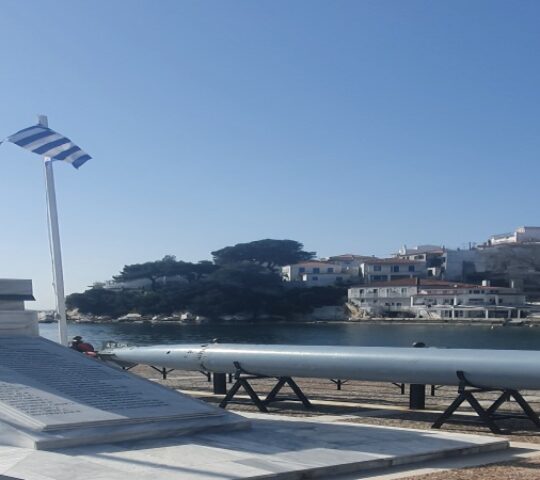 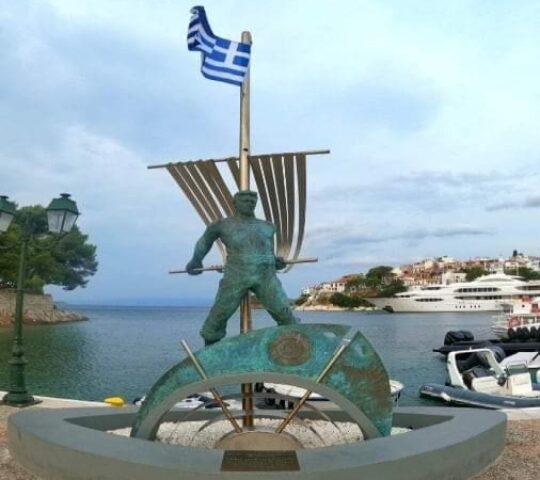 The memorial to the Unseen Sailor stands at the entrance of Skiathos Old Port, near…