SKIATHITIKO SPITI is a private effort to preserve and promote the traditional way of life of  the last century in Skiathos! It is a small family museum by the standards of houses that are  exhibits themselves. It is a stone-built two-storey building from 1910 in the capital of the  island, which is also the only organized settlement, on Polytechniou Street, near the center.

The visitor during his tour of the place meets the relics of the five generations of the family.  These are exhibits of different eras and origins, authentic costumes, lamps, chests, chairs  and sofas, paintings and photographs, tableware, silk and textiles, which all together create  a unique atmosphere.

On the ground floor there is the original fireplace, the traditional sofas from Kastro and  Skiathos, an 1883 chandelier, a Roman amphora, traditional costumes, Skiathos carpets,  embroidery and jewelry. A wooden staircase leads to the floor of the house where there are three rooms and an corridor, where a lithograph with George I King of Greece & Queen Olga  of Greece dominates. Also, the visitor will see chests with relics, the loom, the old iron bed with the original embroidery and mattresses, the wooden bridal chest, and frames with  family photos of the older generations in sepia and black and white portraits. From the  windows visitors can see the yard of the house, where among the greenery there are large  jars (olive oil storage items), agricultural tools and millstones.

The guide tour of the “Skiathitiko Spiti” is done by family members in an experiential way.

1.GEORGE I KING OF GREECE &QUEEN OLGA OF GREECE

The photo of the royal couple is one of the relics of the house. On the 23 August 1944 when the Germans were burning the island of Skiathos in retaliation for the arrest of  Joseph Andler, German commander of the North Aegean , from the guerillas of G.P.L.A. (Greek Peoples Liberation Army) , they got into this house and facing the photograph of the royal couple , which was over the fireplace on the ground floor of the house , they greeted in front of the photo and left without causing any damage.

Photos of the minesweeper “Kalabaka” 1946, where Angelos Papadopoulis was the chief engineer of the ship. The ship swept the marine area of the North Sporades from the mines that had been left from the World War 2. The flag, the whistle and the binoculars belong to that ship.

During the second world war (1939-1945), male members of the family risked their lives to help English people who had remained in Greece to escape. The specific official document is the English government ’s thanks to those men.

Procession of the royal couple in Corfu

11.HANDMADE CHAIR MINIATURE (MADE FROM BOMBSHELL) 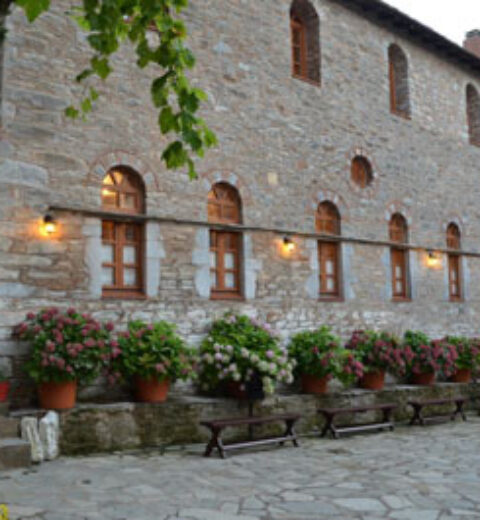